My mother has a few sayings that not only sum up her views on life, but also stick with me into adulthood from when I first heard them as a child. One, which I know is not original but nevertheless rings true to how my mom taught me to live life, is “eat dessert first for life is uncertain.” Another is “pork enhances the taste of just about anything.”

This past weekend I got the chance to marry these two adages in one grand event, SloPig, a celebration of heritage pigs and artful cocktails.

I’m still suffering from a bit of a porkoma after last night’s decadence, and I don’t think I even made it to every morsel. I was pretty much full after my first trip past L’Etoile’s seven dishes, and sorta drunk after the folks at Bell’s Brewery got to me. However, don’t fret, lovely readers, I soldiered on for you. For you I ate what surely was my body weight in porcine products, only occasionally asking what it was I was putting into my mouth and only then after the fact.

You see, even though I grew up in a household full of sizzling bacon, tasty pork chops, and scrumptious sausage, we generally steered clear of the organ meat and other unfamiliar hoof-to-mouth cuts. That all changed at SloPig. I ate heart, liver, head cheese, pig skin, lard, and pig’s feet. And that’s just the stuff I asked about. And it was delicious. So delicious that I had a hard time picking my favorites, but here they are in no particular order…

Truly all of the food I tasted last night was un-freakin-believably delicious. We have some mighty talent in these here parts, and every chef should be dang proud of what he accomplished. The moment Chef Miller said the word “donuts,” however, was a tipping point from which there was no return. Not just any donut, but lard-filled, maple-lard-glazed donuts to be exact. 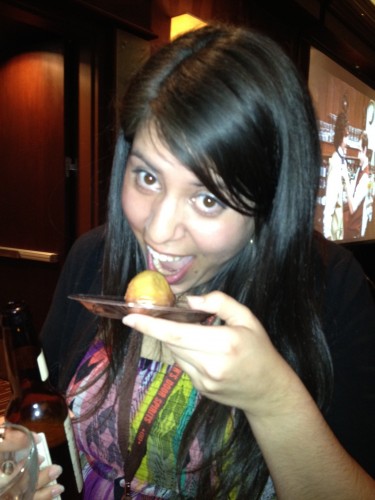 Literally. I might actually die just from eating these donuts and I can’t bring myself to care that a few years have been taken off my life.

I’m sorry to all other competing chefs – you’re dishes were delightful, but the competition was over for me at L’Etoile.

The punch competition at SloPig was a bit more difficult to navigate. I enjoy boozy cocktails, and, as happens, after tasting the first two or three the rest sort of become a hazy mix of pig ice sculptures in your mind. More on that in a future post.

The concoction that really floated my boat, however, was the beer-based booze from Hinterland. I’m not one for super sweet drinks – alcoholic or otherwise – and this mix was a refreshing Goldilocks of punch…just enough fizz, just enough sweet, just enough booze.

First, I think an event like SloPig could be greatly enhanced by the addition of a femme fatale chef competitor. There was one lady bartender leading an entry in the punch competition, and it was a bit disappointing not to see more women representing in what is an, admittedly, male-dominated industry.

Second, and somewhat-related, one punch was named Crimson Tide. A lady bartender would never make such a moniker mistake.

And last, it was really difficult picking my favorites. Not just because all the competitors did such a fantastic job, though they did, but also because as the night wore on my ability to distinguish great from exceptional deteriorated in direct proportion to the number of punches I tasted.  As such, keep an eye out for my next post in which I uncover my Honorable Mentions and, basically, tell you about all the other good stuff I tasted. Bonus: the official SloPig winner of the chef’s competition and the official winner of the punch competition will be highlighted.