This recipe is a version of my mom’s bean soup, which is likely a version of her mom’s soup. What can I say? Loving bacon is a generational thing in my family.

*Unless otherwise noted, all ingredients come from the Green Bay Farmer’s Market

To get you started:
Weezer: Pork & Beans

The original recipe calls for making a roux out of the bacon grease and then adding that to the soup to give it that “creaminess.” Feel free to do that if you wish. I wholly salute the use of full bacon flavor. However, for those watching their figures, this version instead calls for a can of cream of celery soup.

1. Clean and cut the green and yellow beans into a large stock pot. Cut them roughly the size that will fit in your spoon – this is a soup after all. Add smoked ham hock, whole, along with diced onion. 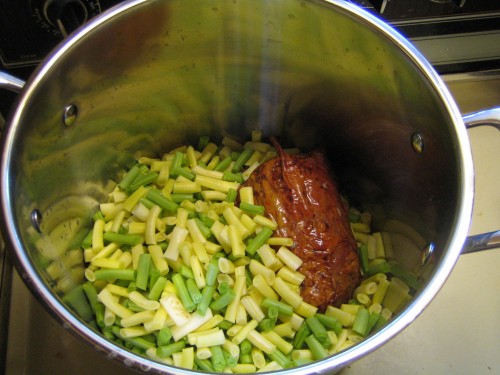 Damn, this is gonna be good.

3. In the meantime, fry up that bacon until it’s nice and crispy. Nope, crispier. You’ll be adding it to the soup, and soggy bacon is no one’s friend.

4. Once beans are tender, remove from heat and fish out the ham hock. Butcher that baby until all of the meat is off and the gristle is trimmed. Dice the meat and add it back to the soup.

5. Add the can of cream of celery soup to the pot and stir until incorporated. Add the bacon. In place of the cream of celery soup you can also make a roux with the bacon grease (Google it) and temper it by whisking in a bit of the soup broth before you add it all to the pot. Again, Google it, but just know that adding the roux directly into the soup pot will likely result in lumpy bacon grease dumplings and not creamy deliciousness.

6. Return pot to heat and let sit until steamy enough to soothe your sore throat. 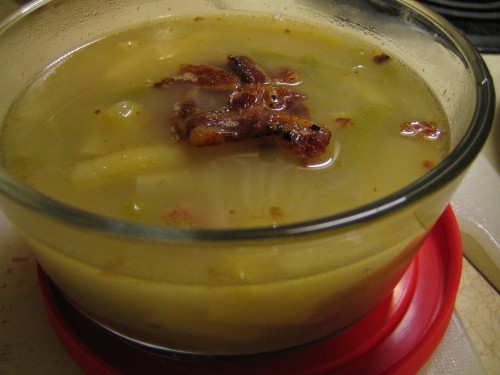 "Everything tastes better enhanced with bacon." - My Mom

One side effect of this soup is that now your house will smell like bacon. Gentlemen, I’m single.