I grew up in a Kosher household. This meant separate dishes for meat and dairy, no shellfish, no mixing meat and dairy, and no pork. Sometime after college, Evan corrupted me, and I excused myself from the laws of Kashrut. Pork, however, was never something I really got into; that is until Sunday night at the SloPig event. Until then, I had no idea how deprived my childhood truly was!

We were fortunate enough to obtain press-passes to the SloPig Milwaukee event, in addition to last minute babysitters (Thanks, Sheryl and Mike!). The event was a celebration of “fine swine and robust spirits,” created by two Madison area foodies. The event housed three main events: a chef competition, a bartender competition, and the ability to gorge yourself on some of the tastiest dishes and drinks in the city. For you, Loyal Readers, I did just that.

While much of what I ate were some of the tastiest things I’ve ever consumed, nothing was quite as scrumptious as the 7 courses created by Tory Miller of L’Etoile. I should mention that I’m not even sure if I had all 7 of the offered dishes. L’Etoile’s booth was the very first booth we visited, and also the very last. At first, it was because of the flavorful soup with chunks of pork and delicate noodles all marinating together in a tasty pork broth. Later, it was the promise of donuts. As soon as I took my first taste, I felt bad for all of the other chefs. How exactly does one compete with a donut? Well, it turns out you can’t in my book. Chef Miller did NOT disappoint. That lard-filled, maple-lard glazed donut was the most delectable thing I have ever eaten. That’s really saying a lot, too, after years of attending the Twin Cities food and Wine Experience. I won’t lie. I went back and had three of those donuts. I’m fairly certain that each one shortened my life significantly, but I can honestly say I don’t feel bad about it. 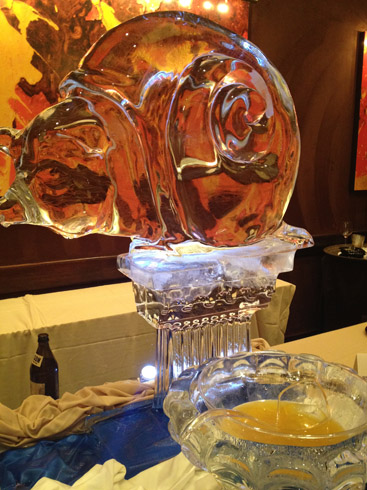 The punch competition was much harder for me to judge. The last three years have left me unable to drink much, so my tolerance is next to nothing. As a result, I probably didn’t even try half of the different concoctions available. That being said, of those I did try, none were quite as refreshing as Micah Melton’s Plantation Punch. I can’t remember what was in it exactly, aside from Plantation Rum, some sort of fresh juice, and magic. I do remember that I loved it and had two cups full. While it didn’t have the same punch (haha) as the others I’d tried, it was there, cleverly masked by fresh, juicy goodness. Therefore, I feel I should warn you that drinking too much of that would be deadly.

Final Thoughts
Before I get too deep into my reflection, I need to share the Cream City Cuisine Rule of the Night: Don’t ask what a dish is until you’ve already tried it. Had we not followed that rule, we truly would have missed out on some fabulous culinary experiences. I would also like to add porkoma to our official Cream City Cuisine dictionary. Nicely done, Mandi.

Mandi was right in that the event was lacking female representation. Just saying. I would also like to agree on the difficulty of picking a favorite. In the beginning, I was pretty diligent about taking pictures of the chef’s name, followed by the dishes. After a few rounds of punch, however, I got sloppy with this practice. I wish there had been some sort of program that had the chef’s name, restaurant, and a list of the available dishes. This would have greatly helped me keep track of what I liked. I imagine it also would have helped me get to more of the booths. Overall, however, I thought it was a fabulous event. I also felt really cool wearing a press pass. I hope to go again next year, although hopefully on a Saturday night instead of Sunday night.

This entry was posted in CCC Updates. Bookmark the permalink.